Last year we designed a book, ‘From Bow to Biennale’, about the long forgotten East London Group of artists, working people who attended evening art classes run in Bow in the 1920s and 1930s by John Cooper. It’s a fascinating story. They showed their work at the Whitechapel Art Gallery, the Tate Gallery, in West End galleries and the Venice Biennale and yet they are unknown now.

I loved their work and bought one of the paintings: ‘Old Houses, Bow’ by Grace Oscroft. An ‘East End Shopgirl Artist’ according to the Evening Standard, she lived in Bow Road, above the family bicycle shop – she didn’t actually work in the shop, but it made a better story. The painting shows a nice little street scene: a few working people, a factory, a street corner, some old houses, a bollard and a lamppost.

We have talked about trying to track down where it was painted, taking time out to walk the streets in Bow, with an eye out for: what? Long-demolished factories? Old-fashioned street furniture? A glimpse of a bay window?

Not necessary as it turns out, going to a meeting in Bow one day: there they were, the very same old houses, still standing, surrounded by the Blackwall Tunnel Approach Road, the flyover crossing the River Lea, McDonald’s instead of the factory. 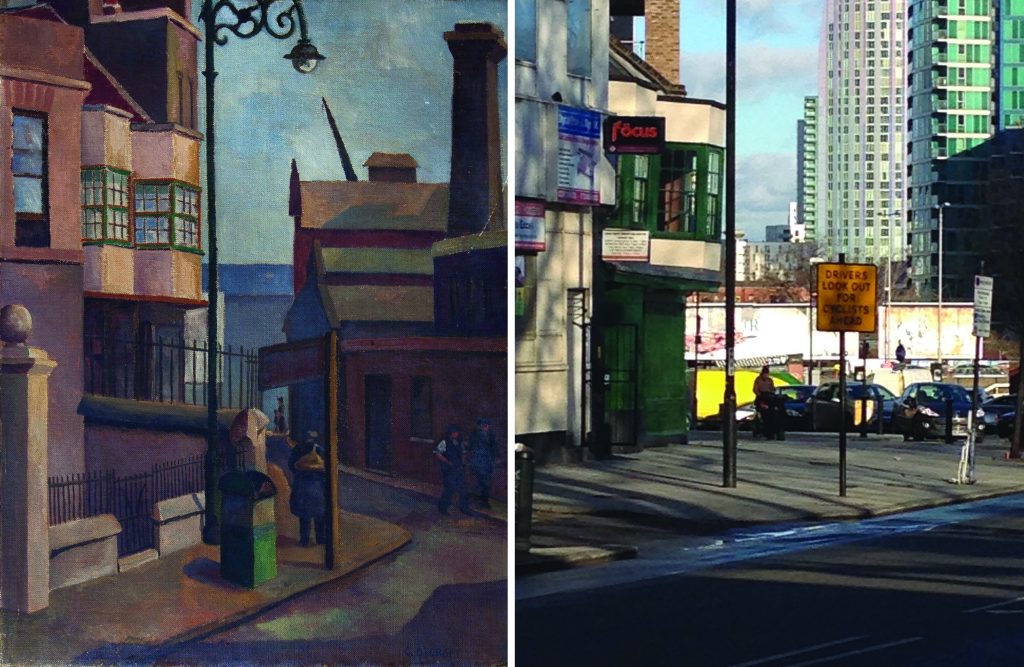 To take my photo of “Old Houses, Bow” I stood in the middle of the traffic, in Bow Churchyard, the very spot where Grace must have set up her easel. Bow Church, next to Bow Bridge, some 700 years old, in front of which the English Martyrs were burned at the stake and where Will Kemp rested in 1600 as he morris danced from London to Norwich, is where George Lansbury worshipped, and the rector invented the corkscrew.

The painting is still in its original frame. On the back is a label from its submission for exhibition. The return address, presumably Grace Oscroft’s then home, is in Bowes Road, only a couple of letters away from Bow Road, barely a couple of miles from our studio in Wood Green.